This weekend I decided to see  a film that wasn’t on my radar at all, “The Silver Linings Playbook”. I knew absolutely nothing about this film, never even seen a trailer for it. I was told that it was a chick flick but it was actually much more deeper than that analysis. The Silver Linings Playbook is an everyone flick, it manages to balance just the right amount of humor and seriousness to please a variety of movie goers. The film has a nice all-star cast which includes Bradley Cooper, Robert Denero, Chris Tucker, & Jennifer Lawrence. 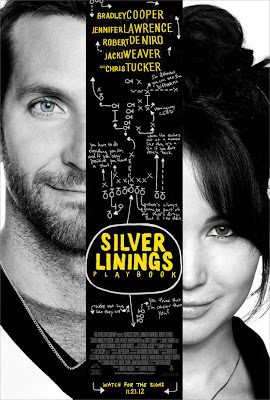 Bradley Cooper does an amazing job as Pat, an ex mental hospital patient that has literally hit rock bottom and is trying to adjust back to regular society. One of the most interesting characters to me was Danny, played by Chris Tucker, I’ve never seen Chris Tucker play a role where he wasn’t screaming and doing outrageous things for laughs. Even though he’s a mental patient in this film, this is probably one of the most normal roles I’ve ever seen Chris Tucker play and he was still awesome!

Synopsis
After a stint in a mental institution, former teacher Pat Solitano moves back in with his parents and tries to reconcile with his ex-wife. Things get more challenging when Pat meets Tiffany, a mysterious girl with problems of her own.