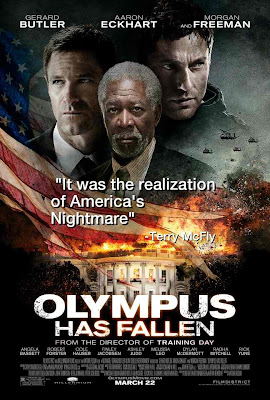 I recently attended a screening of the new film directed by Antoine Fuqua (who also directed Training Day). Olympus Has Fallen features a cast of well known veteran actors such as Morgan Freeman & Angela Bassett, which will also be the actors that probably attracted you to the film in the first place. At first glance of the trailer you can’t really distinguish who the film is about, but the film is about Gerard Butler. Gerald Butler plays a highly skilled presidential guard named Mike Banner.

Here’s a synopsis of Olympus Has Fallen, according to IMDB:

Disgraced former Presidential guard Mike Banning finds himself trapped inside the White House in the wake of a terrorist attack; using his inside knowledge, Banning works with national security to rescue the President from his kidnappers.

Olympus Has Fallen had it’s ups & downs. The movie had a lot of over the top action scenes, similar to the Die Hard or Rambo movies. Every 5 minutes someone was getting blown up or shot in the head. If you enjoy gritty violence packed action films with comedic one liners then you will probably love this movie. Personally, those were my arguments with the film. The comedic one liners by Gerard Butler and the extreme random bullets to the head was a buzz kill for me. Too much mix of emotion. 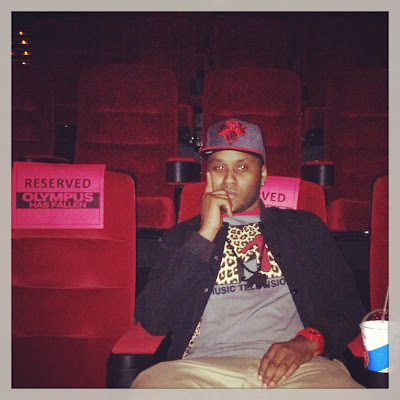 Now let’s get to what I did like about the film. Olympus Has Fallen is the realization of America’s worst nightmare. You will gasp on the edge of your seat while watching this movie. The threat of America being completely wiped out and turned into a wasteland is definitely enough to scare the pants off any American viewing the movie. I don’t know much about how the White House is ran so I don’t know how accurate the movie is when it comes to the secret bunkers and hidden rooms but it was pretty interesting to watch. I did leave the theater with some new knowledge of the chain of command, I never really knew what would happen if the president and vice president were both taken out of commission, this movie shows you what procedures would take place if such an event occurred. It was interesting and fearing to see the downfall of America visualized and the respected American flag burned, bullet ridden and thrown to the ground.

I had my mixed feelings about the seriousness being combined with slight comedic references but overall I enjoyed the film. Olympus Has Fallen is “Terry McFly Approved” and worth checking out on March 22nd, but it is not for the light hearted so be prepared.