May 3, 2013 Posted by Terry McFly Uncategorized

The wait is over and it’s finally here! One of the most highly anticipated films of 2013 is now in theaters, Iron Man 3! The question is, does it live it up to the hype? Is it as good or better than The Avengers? Was it worth the hype and anticipation? …well hopefully this review will answer all or at least some of these questions for you. Don’t worry, I always try my best to write spoiler-free movie reviews here on terrymcfly.com, so you can read this (share it) and still enjoy the movie this weekend. 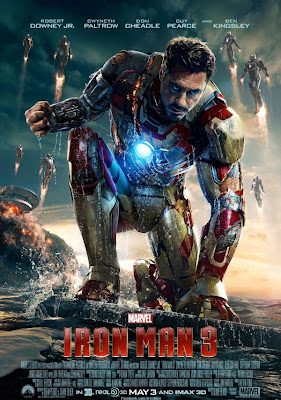 Iron Man 3 picks up right where the Avengers ended. The Tony Stark we see here is the post-avengers Tony Stark. Iron Man 3 is the movie where Tony Stark really gets to shine as a hero, most of the time without the armor. Pepper Pots (Gwyneth Paltrow) also gets a more prominent character role this time around. Robert Downey Jr. really gets to show off his acting chops in this one. This movie is very reminiscent of the first Iron Man film, the inventor Tony Stark is back to doing what he does best. This film makes Iron Man more like the traditional super heroes, he can now change suits of armor with ease. No more briefcase and complicated assembly process that was seen in the previous films.

Iron Man 3 features some of the most sophisticated special effects you will see in any film to date. I highly recommend that if you see it, you go see it in IMAX. This film has a lot of humor (more than usual), I’m not really sure if that’s a pro or con. My only real complaint about the movie is the ending. The ending kind of leaves you confused and lingering as a viewer, I wont really elaborate on it because if I did then that would be spoiling the film and we don’t do that here. The bonus footage after the credits is also a complete waste of time, which will probably make you even more upset about the lingering and confused effect of the ending.

Overall, Iron Man 3 was an awesome experience. Top notch (on the edge of your seat) special effects. The movie is definitely worth seeing if you are a fan of super hero movies. You can definitely expect the kind of action packed fun that you saw in the Avengers. Iron Man 3 is “Terry McFly Approved“. Feel free to share your comments and thoughts below after you go see the movie.