May 31, 2013 Posted by Terry McFly Uncategorized 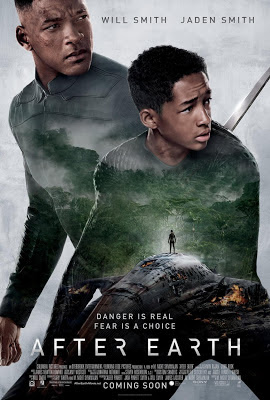 “Danger is Real, Fear is a Choice” is the slogan for this film starring Will Smith and his son Jaden Smith. That slogan is so fitting that it could’ve easily been the title of the movie, it just about sums up the entire film in a nutshell.

Fear is the antagonist, that’s something I’m sure a lot of us can relate to.

After Earth is a “coming of age” story that takes place on an uninhabitable planet earth after it’s people were forced to relocate. It’s a new original sci-fi film highlighting the bond between father and son. I think it’s amazing that the characters of the film were real life father and son because you can see their genuine emotion towards one another throughout the film. Phenomenal acting by Will & Jaden Smith. Will’s character, Cypher Raige, has an intimidating demeanor and he pulls this role off flawlessly as the legendary general of an intergalactic army. Jaden plays the role of Kitai Raige, a young boy seeking the approval of his strict father by trying to follow in his footsteps as a war hero.

I think that this movie also has some sort of record breaking potential with the lead roles being African American within a sci-fi genre. Only time will tell if this assumption holds true.

My only complaint about the film is that it kind of drags along in a few sequences, but once it gets to the action scenes they are definitely worthwhile. I would recommend seeing this in IMAX so that you can truly appreciate all the visual work that has been put into it. I’m not a big fan of M.Night Shyamalan’s work because he usually disappoints me. This film shined to me because of Will & Jaden’s great acting, they are a dynamic duo. Will Smith and Jaden Smith’s ability to immerse and grasp the viewer is the reason why this film is “Terry McFly Approved!” Loved the actors, loved the special effects, the screenwriting could’ve possibly been better but it was worth seeing.