Since the beginning of the year I have been eagerly waiting to get behind the wheel of the 2014 Corvette Stingray to see for myself exactly what it can do and how it performs. I would’ve never imagined or even guessed that I would be driving the 2014 Corvette Stingray or any other vehicle this way. Chevrolet gave me the opportunity to be apart of history. They invited me to participate in the world’s first ever reverse test drive on a closed  track in Nevada. 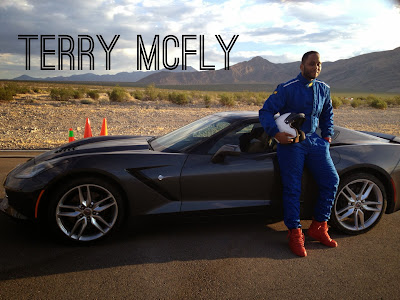 The all-new 2014 Stingray was built from the ground up for ultimate performance driving. But what can it do to those people lucky enough to take it for a spin? Chevrolet decided to find out by creating the world’s first reverse test drive, where the Stingray put a professional driver and five unique people to the test. By measuring brain waves, heart rate, breathing and a variety of other biometrics of the drivers as they rounded the track, Chevrolet captured the physical and mental changes that come from driving a Stingray.

Here’s the film feature of my single reverse test drive (as explained above) along with a screenshot of the special website that was built for me by Chevrolet to allow all of you to interact with my biometrics data and learn more about me.